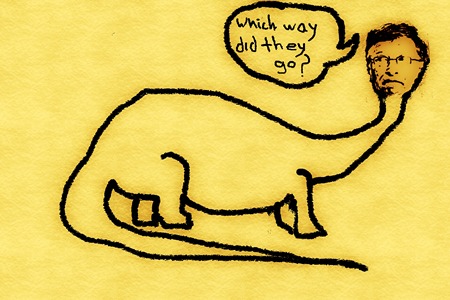 C'mon, Microsoft...You're lagging back there!

But when it comes to your PC keyboard, it summons for us shades of an old Olivetti typewriter.

​Tell me, why is it so easy for us to input diacritical marks on our Android and iOS keyboards, but not on yours?  Have you no concern for the folks out there that don't speak English and need easy access to these characters?  Do you consider them, virtually, déclassé?  Is it an oversight, or are you just resting on your laurels and quietly assuming in your myopic, Redmondesque world that an okay keyboard is good enough?

A character map?  Really?  Have you ever tried to add an umlaut?  An accent aigu?  Macrons?

We implore you, Microsoft, to join the 21ˢͭ century.  For the sake of the Māori people, the Cyrillic demographic and the rest of us out here...please catch up!  Au revoir, and have a nice day.

(***UPDATE*** July 16, 2014)  "Marking this change of emphasis, Nadella last week rebranded Microsoft as 'the productivity and platform company for the mobile-first and cloud-first world.'" Yeah, right. I rest my case.

(***UPDATE*** July 17,2014) Another quote from Nadella, "We live in a mobile-first and cloud-first world,” Nadella wrote in a memo on July 10. “We will create more natural human-computing interfaces that empower all individuals. We will develop and deploy secure platforms and infrastructure that enable all industries.” Hmm... Actions speak louder than words?

(***UPDATE*** August 7, 2014) Spoke with a developer this week, and the rumor mill has it that Microsoft has acknowledged the issue of updating the archaic employment of diacritical marks on their PC keyboards.  One of the stumbling blocks, according to this developer, has been patents and Microsoft's search to find workarounds for the keyboard patents they do not own that do the job, viz. Apple's and Google's finger-slide diacritic accessibility (though this doesn't seem to be a problem on on the Surface's virtual keyboard, so I don't know if I buy that argument.) What I have in mind for their physical keyboards is a press and toggle approach, or something along those lines, and I can't imagine that patents are locked up for all the permutations of that approach.

(***UPDATE*** August 20, 2014) Coming soon!  Within the next week I plan to launch petitions on Facebook and with Change.Org to compel Microsoft to update their PC keyboards.  Please read and sign either, or both!  And share this important movement with your friends.

(***UPDATE*** August 21, 2014) The internet -- you know, that world -- just announced today that Microsoft is planning to unveil its new operating system, Windows 9 (called "Threshold," if you believe the leaks), on September 20th of this year.  Here are some of the improvements -- or rollbacks -- the sytem is rumored to have:

(***UPDATE***September 29,2014) Here's a link to a petition I started on Change.org to compel Microsoft to upgrade their hardware QWERTY keyboards:

Disclaimer: This site, www.mīcrosoft.com, has no alliance nor affiliation with www.microsoft.com.  We've got nothing to do with them.  We just want them to get on the ball.